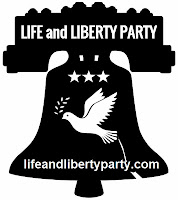 Today, Sunday 12/12/21, the Life And Liberty Party held their virtual convention at 12:00 PM Mountain Time.  Four states were represented, Alaska, California, Montana and New York.  The main order of business was whether or not to remain a stand alone party, or to become the Life & Liberty Caucus within the Libertarian Party.

Discussion centered around overall progress, and the virtual impossibility of overcoming ballot access hurdles.  It was noted that the L&LP leadership has historical ties to the Libertarian Party, with outgoing L&LP Chairman Myers having served on the Montana LP Executive Committee for several years, eventually becoming MT LP Chairman in 1984.  Outgoing L&LP Vice-Chair, Lori Stacey has assisted the LP with multiple successful ballot drives in several states over the years.  Outgoing Secretary/Treasurer, Gary Gunsher of New York said it was our best path forward.  Following discussion, a vote was taken.

Officers of the L&L Caucus were then elected.  Lori Stacey of California was elected caucus Chair.  Gary Gunsher of New York was elected caucus Vice Chair and Social Media Editor.   J.R.Myers of Montana was elected caucus Secretary/Treasurer and Webmaster.  The L&L caucus will continue to have a membership with $20 annual dues, their own website and FaceBook pages.  The focus of the caucus is to implement the established Life & Liberty Party Platform within the Libertarian Party and nationwide.

We are encouraging our tens of thousands of supporters across the nation to do the same.  Join your local, state and national Libertarian Parties.  Help us to continue to promote the ideals of Life and Liberty by running and serving as local and statewide Libertarian Party officers and candidates for public office.

If fetuses and women have equal rights, then obviously women who can defend their rights have the right to abort the invading fetus. Even invited guests can be evicted if they refuse to leave. Your religious nuttiness not welcome in LP. And lots of people will tell your followers so. Some will run away crying and cursing you.

All people have equal God given rights. Even the word woman "womb-man" inherently reflects the nurturing creative energy of a mother.

I am all for researching fetal transplants. Why should eviction equal death? We need to approach these issues creatively.

Life is not just about birth, it's also about death, and everything in between. So euthanasia, war, capital punishment are also part of the spectrum of life issues.

We have already received many offical greetings from LP members and leaders. Anonymous does not speak for the LP. People often say the darnedest things! They often act out inappropriately too when they don't get their way...

Let's be adults and work together on issues of mutual concern whenever possible.

Please note: "womb-man" is a false folk etymology. I am a linguist. Please, for the love of everything, correct this. Woman coms from Wif-man in Old English, and its origins are clearly traced to proto-indo European. Males were designated with the word wer-man. -man- designated person. This has been proven beyond any doubt. You see the remnants of -wer and _wif in the words "werewolf'. and "wife.

To post this dirsbrfedits you from the get go. Please correct it.

Remember this and take is seriously.

An honest man when faced with an error can do two things:

He can apologize and correct his mistake.

He can cease being an honest man.

Of course I can provide hundreds of references from several hundred years of philology and linguistics. But you can find them as well. I think you will be more convinced if you look into this yourself. But I am happy to provide the citations.

For reference, I have been a member of the LP for 43 years. No one speaks for the LP, however starting off by asserting an obvious falsehood discredits all of those who are pro-life. Please fix this.

Point taken, Gary you are correct. "Womb-man" is a mistaken folk etymology. However, I am unable to change the posted comments. That would be up to the blog owner.

Thank you. Being up front about mistakes is something that we don't often see in in this politically-charged and competitive online culture. Most of us are too prideful. Appreciate the acknowledgment of error.