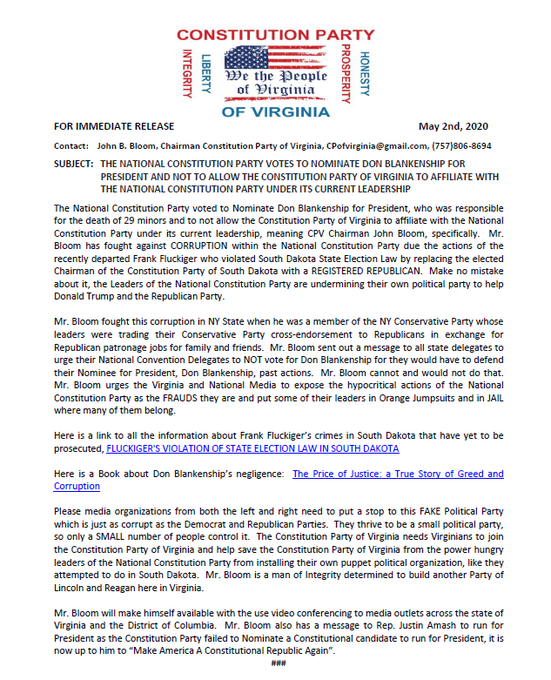 Yeah the national CP faces an uphill battle this year. I will be very surprised if Don Blankenship gets more than 120,000 votes (I would have made this prediction even if there was no Coronavirus). This is because of the accumulation of damage due to disunity: In 2006, the national CP decided that they could not interfere with the internal affairs of a state party even if the chairman had a view contrary to the national CP platform. Lots of state affiliates left because of this. Recently they lost state affiliates for the opposite reason. Now the National CP is losing affiliates because they interfered in South Dakota.

LOL @ anonymous. That lends credibility to your reply.

I'm surprised you didn't read Mr Bloom's press release with a more careful eye. (or not).

Besides being inaccurate, his reference to S.D. was completely irrelevant to the subject of the press release.

And, his cry to the media to help "stop this FAKE Political Party" conveniently ignores that he had just voted to have his state "Re-Affiliate" with said party.

If the national party leadership are all 'frauds', what would that make Mr Bloom for seeking approval of his affiliation request?

And, not only is his closing claim that "the Constitution Party failed to nominate a constitutional candidate" pure flummery and personal opinion, it demonstrates complete hypocrisy; given that he had personally declared that his party would NOT support the constitutional process of nominating a candidate for POTUS if that process resulted in the nomination of Don Blankenship.

Mr Bloom sought to 'dictate' to the National Party who they could, and could not, nominate and who his state would, and would not, support.

Although Mr Bloom, by referring to himself in third person and declaring himself to be a man of Integrity, did provide entertainment.

Once again, this forum has demonstrated that it loves fodder but isn't as much interested in actual news and honest information.

@ Anonymous "I will be very surprised if Don Blankenship gets more than 120,000 votes."

120,000 is probably overly pessimistic. But your point is taken.

Long term average national CP presidential vote return across the data (seven elections) is 142,408. Therefore, assuming a reversion toward the mean this election, a more appropriate estimate under a strongly pessimistic view would be 142,000 votes.

Keep in mind, the national CP vote returns do show a "slight" cyclic tendency. Meaning, a drop off in total votes tends to occur following a respectively larger return, as was the case in 1996 to 2000, and again in 2008 to 2012. Thus, ignoring the other factors you mentioned, just the observed data alone could support a more pessimistic view.

The regression forecast which necessarily must assume all things are equal this time--and they are not, as you rightly point out--is 207,801 votes. In the past, the linear regression has actually been fairly close to the realized value (excepting 2012).

The more aggressive cuvilinear estimate carried one period forward is: y = 67066e0.1619x yields what may be considered and overly optimistic upper bound estimate of 244,907 votes. Between these two forecasts I take the model's point estimate to be roughly 226K votes. (Again this assumes all things are equal this time, and they probably are not.)

How unequal matters may be, of course, is subject to debate. Will the prediction model reflect the observed vote return? Probably not. The anomalous conditions this time, in addition to a cyclic tendency as mentioned will likely suppress the realized return.

Opinions regarding the particular candidate and the prevailing conditions notwithstanding, I would still be very surprised if the gentleman's vote return does breach the mean (at 142K votes).

@ Anonymous If pressed for a prediction, without hesitation (and absent any other criteria) I would suggest the model's point estimate--~226K votes.

I base this entirely upon the model's past performance. It's been reasonably accurate. Adhering to the model, strips out subjective "opinion bias". However, if one wanted to factor your expressed pessimism (an additional criterion) with the intent of determining a more refined estimate, I would suggest two techniques: (1) a standard deviation band below the model's regression estimate; or (2) cleft the outlier 1992 election.

They both lead to the same general vote return estimate...namely an estimate of about 175K votes.

It may be appropriate to eliminate 1992 as an outlier. Normally, I would not. But being the first election as the national party was newly forming, 1992 was unlike the others elections. Its substantially smaller total return reflects this "handicap".

By eliminating the 1992 outlier, the model yields a range estimate of 170,630 (curvilinear) to 181,133 (linear). The midpoint is--175,882 votes. In this unusual instance, the curvilinear estimate is marginally below the linear regression...damping perhaps partisan irrational enthusiasm. Both trend lines produce a tight range around 175K votes.

The standard deviation (SDEV) of the national CP vote return data is 59,073. Weird calculations, I know but...

Then using something of a Venn diagram overlay (since I assume the realized vote return will be greater than the mean), I clip the data ABOVE the mean with the SDEV. This gives me an upper limit of 201,481 votes.

These are merely iterations of "suppose". That said, if taking a pessimistic view (and I am not arguing against that) it looks like the 2020 national CP candidate can be more or less confident of receiving a vote return of about 175,000.

Perhaps I was being too pessimistic however as you pointed out they are things that are unequal and anomalous which cannot be accounted for in a model. The things that make me pessimistic are the already mentioned disaffiliation of Alaska and Montana (maybe disbanded is more accurate) as well as New Mexico and Virginia not supporting the nominee along with several state parties being inactive. The fact that Don Blankenship as so far not distinguished himself enough from Trump. In 2018, he ran as a Trump loyalist in Republican Party. After Trump endorsed his opponent and he lost, in his open letter to Trump he said that he fully supported Trump in his agenda. Yes, I am aware of the fact that Don Blankenship is claiming out that Trump has failed to drain the swamp, is not tough enough on China, didn't build enough of the wall. However his criticisms of Trump didn't come until after losing the Republican nomination in 2018. Every presidential election there is always the boogeyman argument of third parties spoiling an election. However this time I get the sense that with everything that is happening right now, every third party (LP, CP, GP, etc) is going to do worse than in 2016. Finally Don Blankenship is linked to the explosion (fair or non-fair), and every mention of Don Blankenship in the media will bring that incident back again.

As to press "linkage" between Mr. Blankenship and the Massey mine disaster, that would be natural. My view of the gentleman is that he served his time. It's what he does with the time available to him from here that is of import.

With your assessment that 3rd parties will poll sharply lower this year, I can agree for the most part. Yes, I do not see the LP polling anywhere near what was an exponential increase in 2016...following a similar increase in 2012.

The GP on the other hand, I think will continue to expand its ballot position.

As for the CP, it was widely presumed that candidate Blankenship would bankroll the CP. Everybody aboard a sure 'nuf gravy train. Well, I've yet to see that train leave the siding. So, as to the gentleman candidate's fabled financial benefit for state parties, I have yet to see it in Idaho, or any other state if truth be told.

If the gentleman is campaigning, who's to know? He is incommunicado. Helluva way to run a campaign. Should conditions remain the same by the time we get to the CP-Idaho convention in August, then I may agree with a more pessimistic view.

"I will be very surprised if Don Blankenship gets more than 120,000 votes (I would have made this prediction even if there was no Coronavirus)"
This is a flippant remark that I regret saying. What is more accurate to say is that with Coronavirus and the current climate it will be an uphill battle. Now we will have to wait and see. I want to end my remarks with advice rather than criticism. Don Blankenship-if you or anyone in the national CP are reading this: I have been on your social media page (Twitter, Facebook, and your website). There needs to be a lot more going on. I know that campaigning is hard during this time especially in-person travel and rallies. Much of the campaign money will be spent on court battles to get petition requirements reduced or to accept electronic signatures. However at minimal costs you can have a vigorous online campaign through Youtube videos, Facebook Live Q&As Videos, Reddit AMA, Zoom rallies, etc. I took a quick glance at Jo Jorgensen's Facebook page and while she could be doing more, she has Q&A townhall videos, videos promoting the LP. Nothing is stopping you from doing that.