Current results of the California Super-Tuesday Primary Election vote of March 3, 2020 provide an interesting comparision of the relative electoral strength of many candidates currently leading the pack in the alternative political marketplace.

Significantly, this was the first election in California that voters were able to register, or change registrations at the polling place on election day.  Also, since many of the parties' primaries aren't binding, this was the only plebiscite of these candidates.  Since California is the largest state in population with 55 Electoral Votes, these results are noteworthy. 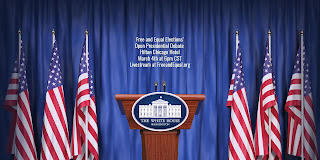 The day after the election, a well-publicized and now historic candidates debate was held at the Chicago Hilton co-sponsored by Free & Equal and Open The Debates.  It was moderated by well known political activist, Christina Tobin.  There were 18 candidates, representing several diverse parties, participating in two debates of  9 candidates each.  Each debate lasted about 3.5 hours throughout the afternoon and evening.

Fifteen of those candidates had also appeared on the California primary ballot the day before.  The California results were not yet realized at the time of the debate.  As of 3/6/2020, the California Secretary of State is reporting vote totals, including for those 15 candidates who also participated in the Chicago Open Presidential Debate.  J.R.Myers of the newly formed Life & Liberty Party is currently the frontrunner among the 'Chicago Fifteen' at 5,898 votes and counting.  With nearly 3 1/2 million votes yet to be tallied, things could change.

It has been FALSELY reported by some in the Idaho press that I have suspended my campaign for POTUS. This is absolutely FALSE! It is a last minute dirty campaign trick prior to the Idaho primary on Tuesday.

I found your blog on Google and read a few of your other posts too, it is very informative and also influencing me to read more of yours. You have done an exceptional job by adding your hardwork and dedication to it. I am a big fan of art and craft. I just added you to my bookmarks and recommending your blog to my social profiles too. Just like the other budding bloggers i have started my blog, You can support me by visiting my site for more paper airplane related information and knowledge, Keep up the great work Look forward to reading more from you in the future. Thanks in anticipation. how to make a paper airplane