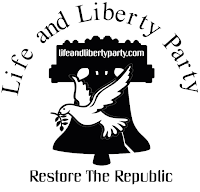 The timing of CP-Idaho's "Boise Debate" (tentative 29 February 2020) for our presidential candidates, which includes Mr. Myers, is fortuitous. The Boise Debate occurs three days in front of the AIP California Primary (which is 3 March 2020).

And the California Primary occurs one week in front of the Idaho Primary (which is 10 March 2020). This schedule permits a concentration of earned media coverage associated around both State's primaries, as well as promote the debate featuring CP-Idaho declared presidential candidates.

We hope to pipe the "Boise Debate" to various US locations, and are beginning coordination to bring the debate to fruition. Declared presidential candidates are encouraged to contact CP-Idaho as we work through the details and scheduling.

Wowsers! If the Drys could get their nominee on the CA ballot their vote totals would be the highest they have had in 40 years!

I wish both of them luck, but the AIP primary is non-binding and the party is run by boomer conservatives. The likely scenario is that they'll just go for a fusion ticket with Trump again.

Why would anyone desire to be a candidate of the AIP? That Party has a horrible racist history dating back to its founder, William Shearer. Former presidential nominees were far-right nut jobs like John Schmitz, Lester Maddox, John Rarick, et. al.

Let's see... ballot access in the most populous state in the nation comes to mind!

Yeah, sell your soul to get on a ballot. No core principles whatsoever.

The Democratic Party was founded by Euro-centric, white, slave owning males. So why should this be different?

In agreement with NewFederalist..."why should this be different?" And of course, it isn't.

The good reverend only sees the alleged "soul selling" through his own jaundiced eyes. Sadly, he should tend to his own flock.

Why not expand this chattel market of "soul selling" to include Church denominations?

Have they not themselves auctioned off spiritual clarity for the lucre of utter hypocrisy?

Besides, do the Scriptures not say the son's teeth are not set on edge by the sins of the father? Yet, I see the good reverend would condemn that child anyhow. And so probably too, Matthew the tax collector, Mary Magdalene the prostitute and above all Christ Himself.

Ah, but the gentleman is a zealot; and a self righteous one at that, one who relishes stoning and doubtless calls it "atonement".