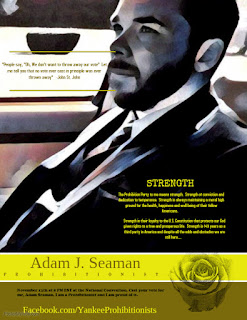 I asked Cody Quirk, The Owner of American Third Party Report to interview me before the upcoming Prohibition Party National Convention on November 13th.

Q: So tell us a little about yourself. How did you get into Prohibitionism, and particularly, the Prohibition Party?

A: First I got into the party.  I am a huge fan of history and at the time I was looking for a political party that had history to it and of course I found them.  They have a long history so I bought C.L. Gammon's book, read about it and I was enchanted.  I thought to myself, this is something I can get behind.  Nobody thinks Prohibition could ever happen again but nobody can tell me that it isn't a moral and just cause.  So I look at it as the moral thing to do.  The Prohibition Party are rebels, going against the "grain", literally, and that appeals to me.

Q: What is your opinion of the schism that happened with the PP back in 2003?

A: It was bound to happen and its unfortunate it had to come to that.

Q: What do you hope to accomplish with the PP? Do you think the party could become a viable force in politics again?

A: I think the party can become a viable force again because we are the only party to see alcohol as the problem that it is.  It's a drug and drugs are a problem now more than ever in society today and we need to figure out how to rid ourselves of it for good.  We are the only party looking to do that.  There is a niche there, there are people out there that have been affected by this issue who have no political voice & we need to reach out to them and rebuild this party in the image of the 21st century, to take the party back to its traditional values of progressiveness and reform in the center of the political spectrum.   I hope my candidacy will be the next step in that direction.

Q: In today's world where legalization of cannabis and the watering down of drug enforcement laws are happening all over our country; how do you think you can spread the party's message with the voters of the 21st century and build up support on it?

A: We have the same goal and that is to rid ourselves of this epidemic of drug use.  It's not all to be blamed on illegal drugs either as you know.  The legalization of Marijuana and the watering down of drug laws is just another route to get there.  Society is experimenting, trying out new ways to solve this problem. We don't necessarily believe in this way but we know that the reason for it is genuinely good.  It is suppose to lower drug use, it suppose to be less damaging than alcohol than hard drugs and all that, we get that.  Whether or not it will work remains to be seen and there is some evidence out there that it isn't.  Whatever the outcome, we are here to offer society a sober, common sense solution.

Q: Ok, so if you were elected to office, then what steps would you take through the executive and legislative branches of government to implement such policies and bring about these desired goals and vision?

A: I would go about it in as gradual a process as I could and that process would begin long before I got into office.  America is a strange place in many ways.  Things like whether or not Transexuals can use certain bathrooms is a political issue but Alcohol, a substance that kills and destroys the lives of hundreds of thousands of Americans and costs governments on every levels millions of dollars in revenue a year, is not.  It makes no sense.  As massive a problem that it is, it will take time to perfect a system to put in place to ensure that this time, prohibition will remain in place.

Q: Do you say you agree with everything in the PP's current platform, or, in your personal opinion, do you think the PP could change or maybe tweak a few things in their platform?

A: In the 2016 platform there are things I agree with and disagree with.  I can't imagine most people agree with everything on their respect political party platforms.  As for the new platform, it is currently being revised and tweaked.  You will know more in a week..

Q: Specifically, how would you turn the PP back into a viable force? Would you focus on grassroots activism or on petitioning for ballot access and getting multiple PP candidates on the ballot, or both... Or neither?