LP.org: 'Income tax anniversary is another day that will live in infamy' 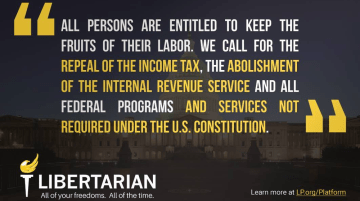 Oct. 3 is the anniversary of the costliest law ever enacted upon American taxpayers. On that day in 1913, President Woodrow Wilson signed the Revenue Act of 1913, the first post–Civil War income tax. Once constitutional objections to an income tax were eliminated by the 16th Amendment, Congress wasted little time in passing one. The tax started out at 1–2 percent for most middle-income people and topped out at 7 percent for inflation-adjusted incomes of $11,010,700.
“What’s interesting is that the income tax was passed in conjunction with a lowering of tariffs from 40 percent to 25 percent,” said Libertarian National Committee Chair Nicholas Sarwark, who is also currently a Phoenix mayoral candidate. “Today, income tax rates range from 10 percent all the way to 37 percent — and that’s after the 2017 tax reductions. To add insult to injury, the Trump administration, acting with little participation from Congress, is bringing back tariffs that are nearly as high as they were before we had an income tax.”..
To read more click here.
at October 13, 2018