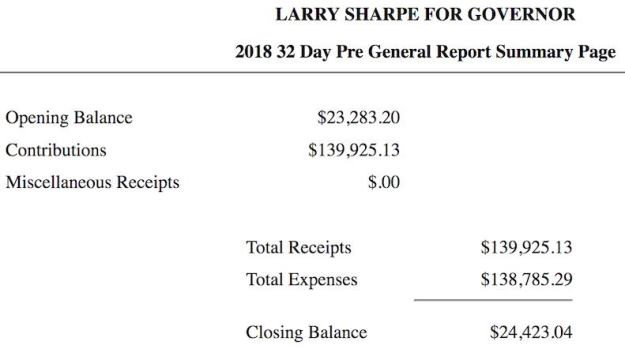 
The Larry Sharpe campaign reported raising nearly $140,000 in its 32-day pre-general campaign finance filing. The report covers a period of a little over two months. Sharpe is the Libertarian candidate for Governor of New York.
The campaign spent roughly the same amount during the period and reported $24,000 on hand for the final month of the campaign.
A cursory analysis of the spending shows roughly $12,000 spent on Facebook advertising, $6300 on radio ads with WYSL, a small AM radio station south of Rochester, roughly $6000 spent on audio-video equipment, over $10,000 on campaign shirts, over $13,000 on lawn signs, and $36,000 spent on consultants. We can’t tell if the Facebook advertising was targeted to New York voters, or to potential libertarian contributors nationwide...
To read more, click here.