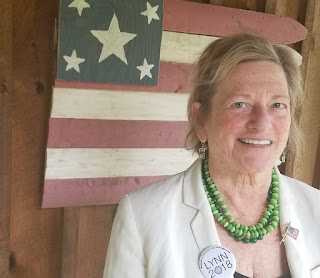 (Dr. Lynn Kahn is the Green Party candidate running for Congress in the 21st district of New York.You can visit Dr. Kahn's campaign website to learn more by clicking here. )
JF: Dr. Kahn, you worked for approximately 32 years inside of the federal government as an organizational psychologist. How has that background helped to shape your view of government, your vision for government, and impacted your decision to run for public office?

LK: My experience inside government started consulting to new executives then designing and facilitating teambuilding off-sites then supporting culture change efforts introducing customer service standards to an entire agency where no such standards had existed before. I transferred to the FAA (Federal Aviation Administration) in 1992, then represented the FAA on the White House Partnership to Reinvent Government where I gained the widest possible view of how agencies interact. I helped build partnerships across agencies and across levels of government and with community-based and non-profit organizations all the while learning how to address inter-agency challenges such as communication, coordination and performance measures. When I returned to the FAA in November 2000, I provided consultation to the executives writing the strategic plan to modernize our airspace system (including changing from ground-based radar to satellite based navigation and communication). The inter-agency executive team leading this transformation included executives from the seven agencies that fly in our airspace system, while other policy boards were established to gain input from airlines, manufacturers, airports and other air travel stakeholders.

To develop the plans and roadmaps to modernize air transportation, we invented new terms for such complicated planning such as solution sets and points of delivery. When driving solutions to complicated problems, the goal is to create an enterprise architecture which allows coordination across multiple levels of activity. Eventually, I took that model for strategic planning and applied it to criminal justice reform – essentially a focus on clear, relatively short and yet comprehensive strategic planning.

So, that background shaped my view of government as an interacting living system, where coordinated efforts can deliver extraordinary results. My vision is an America that works for everyone with no one left out; my vision of government is a high-performing network of teams and partnerships that delivers better results for more people. I chose to run for office as I saw the anger, pain and needs of far too many Americans, while seeing what I calculated to be one trillion dollars of waste and believing that I understand the mechanics of government well enough to facilitate powerful change and extraordinary results.

JF: In addition to 32 years as an organization psychologist for the federal government, you served 6 years on the White House Partnership for Reinventing Government and wrote 2 books on government reform. Clearly you have a unique perspective on the role and the function of government, could you speak to that for a moment? Describe your view of how the US Government should operate?

Correction: 6½ years on Reinvention was during my 32 years inside the federal government.

LK: The key to effective government in our constitutional republic is to focus and coordinate efforts on measurable outcomes. Problems are connected and so are solutions, so the shape of government in the 21st century must be networks of partnerships all focused on improving results in a specific domain. That means addressing our hardest challenges --from poverty to mass incarceration to easier access to quality healthcare – will require coordination across agencies with direct input from communities impacted by policy.

JF: Earlier this month you released your 5 Demands for the 2018 Farm Bill. Could you tell us a little bit more about these 5 points, the importance of the 5 points, and why this issue is important for the 21st district of New York?

LK: Family farms and dairy farms in particular are embedded in the history and culture of the founding of our nation. I have met New York dairy farmers whose families have owned their land for decades, some for hundreds of years and one upstate NY farming family that received their land grant in 1785!
Now, dairy farming in America including New York state is under attack. Federal policy has set the price of milk BELOW the cost of production for most of the last few decades and for seven of the last eight years. The cost of production is now $21.39 Cwt (hundredweight) while the New York State pay price was about $15.50 for August-produced milk. Other assessments charged to the dairy farmer include transportation fees AFTER the milk leaves the farm hauled by the processor. At the end of the month, dairy farmers can receive as little as $6.85 per hundredweight of milk, a price so far below their costs of production that bankruptcies loom large.
Since 2013, net farm income has declined 52% with predictions for farm income in 2018 at a 12-year low. Farmers are flexible and they can adapt to changing conditions but the last eight years have been a triple assault of:

I have called for emergency relief, including setting the price of milk at $20 per hundred pounds and an emergency, temporary halt to state taxes and fees. I have also called for legislative hearings first to understand how and why and who benefits when milk is priced below the cost of production and then to discuss supply management and what that might look like in the United States. A second set of hearings would look at predatory lending in rural communities, how nut beverages have come to be called “milk” and what goes into anti-dairy and anti-milk advertising.


I believe big money, big government, international agriculture and international banking are destroying family-owned farms and especially dairy farms. More than that. We all eat. As more and more family-owned dairy farms go bankrupt, we lose local control of our food supply. This is a crisis for farming and agriculture, and also an ethical, legal, healthcare and constitutional crisis.
Rural America has gotten the short end of the financial stick for decades and I call for funding for rural infrastructure and creative solutions to the bureaucratic barriers so we can put New York products in New York schools and businesses.

JF: Following the release of your 5 demands for the 2018 Farm Bill, you actually got some praise from Congresswoman Stefanik's spokesperson who said, " "Unlike big-government Democrat Tedra Cobb, who knows nothing about the Farm Bill, Dr. Kahn joins Elise Stefanik in recognizing that agriculture is the backbone of the North Country."  What is it that you and Congresswoman Stefanik realize that about farming that Tedra Cobb doesn't?

LK: I don’t know what Tedra Cobb knows about farming. I didn’t respond to the negative comment by Stefanik’s spokesperson.

JF: While Congresswoman Stefanik is drawing comparisons between herself and you on farming, you've actually pushed back on that idea. You've said, and I'm quoting here, " I don't think Elise Stefanik has done enough on anything. She got into politics doing staff work, and she still sees her role as doing staff work. She might help a few veterans or a few farmers find their way through the bureaucracy, but she is not asking the big enough questions, like why are we doing this? Why are we driving family farms out of business? " What are you willing to do for farmers, in Congress, that Congresswoman Stefanik isn't?

LK: I call for a fair price for farm milk and legislative hearings on milk prices, supply management and predatory lending in rural communities. Big money does not want these hearings. I don’t believe corporate-funded Republicans or Democrats can solve these problems on their own – the Green Party does not accept donations from PACs, lobbyists or corporations. Only an independent or third party politician can honestly demand investigations into these issues.

JF: Dr. Kahn, in addition to writing 2 books on government reform, you wrote one on peacemaking. The idea of peacemaking is a part of you campaign message and a big plank within the Green Party platform. Could you outline your vision of what American foreign policy should look like? What "peacemaking" would look like?

LK: I have written several articles recently about this, so I’m quoting myself mostly here. And thanks for the question.

In my first book, Peacemaking: A Systems Approach to Conflict Management (1988), I defined this theory of peacemaking: People joined together in face-to-face dialog generate a field of energy with patterns of balance and rhythms of harmony across multiple levels of awareness. I believe in the power of face-to-face dialogue and that has driven much of my beliefs and policies about defining foreign policy in the context of peacebuilding.
I do now make this distinction: Peacebuilding is active. Calling for peace talks or a ceasefire, convening a meeting between enemies, or publishing a statement or framework for halting hostilities are all activities of peacebuilding.
Peacemaking is psychological; it is internal. Peacemaking is a personal transformation, a change of heart or new awareness that only emerges in dialogue. Peacemaking implies psychological growth.
My doctrine for American foreign policy has five principles:

Finally, I have called for a Global Ceasefire on the campaign trail – and will have more to say in a press event in a few weeks.

JF: Before becoming a Green Party candidate for the United States Congress, you ran for president in 2016 as an Independent. How did it come about that you joined the Green Party? I know that in 2016 you became friends with Sedinam Kinamo Christin Moyowasifza Curry who was seeking the Green Party's nomination, did that affect your decision to "Go Green" at all?

LK: I met Sedinam and other Greens on the campaign trail and in independent Presidential debates and forums. I chose to run as a Green. I talked to many small parties in NY and chose the Greens because I supported and believed in their values, especially the 4 pillars; ecological wisdom, grassroots democracy, social justice and peacebuilding.

JF: It was recently announced that you will be included in 3 televised debates between Congresswoman Stefanik and Tedra Cobb. These televised debates will no doubt give you your largest platform to get your message out to voters in the 21st district. How are you planning to differentiate yourself from the other 2 candidates?

LK: I have far and away the most experience driving solutions to complex problems. I will put out ideas and policies that solve problems, educate listeners and voters about how to transform government, and take positions that Rs and Ds cannot because they take corporate donations and pay too much attention to too many lobbyists. So I am the only way that can talk about a Global Ceasefire, universal health care as a national security requirement, or transforming family law.
at September 07, 2018