WJCT: From His HQ In Jacksonville, Reform Party Candidate Darcy Richardson Aims For The Governor’s Mansion 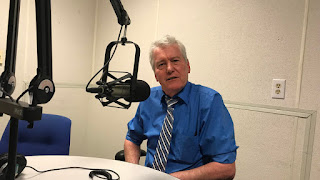 The following was originally published in WJCT.org.

Gubernatorial candidates Andrew Gillum and Ron DeSantis will likely dominate the airways up until the November election, but there are other options, including Jacksonville’s own Darcy Richardson.

Richardson, 62, was born and raised in the suburbs of Pittsburgh, Pa. He was one of 10 children and his father was a career Air Force officer. The family lived in Germany for six years and various states throughout the U.S. before his parents settled back in Pennsylvania in 1968, during the Vietnam War.

Richardson graduated from Norristown High School in the suburbs of Philadelphia after his family moved there in 1971.

He went to Temple University in Philadelphia, where he majored in business and economics.