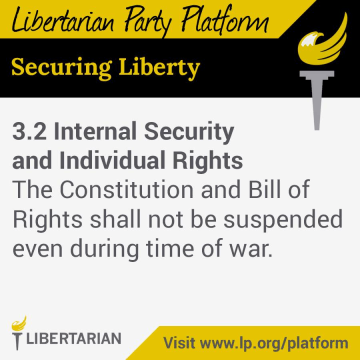 On July 9, President Donald Trump nominated D.C. Circuit Court Judge Brett Kavanaugh to fill retiring Justice Anthony Kennedy’s seat on the U.S. Supreme Court. Kavanaugh once served as a law clerk for Justice Kennedy, who reportedly recommended him to Trump as a suitable replacement. Libertarians would appreciate aspects of his judicial record, which leans toward constitutional originalism on most issues, but Kavanaugh also has a significant dark side. He’s willing to sacrifice our most fundamental liberties in the name of fighting terrorism.

“Unfortunately, Brett Kavanaugh has a troubling track record of giving a pass to excesses in the war on terrorism,” said Libertarian National Committee Chair Nicholas Sarwark. “It’s good that he’s a Second Amendment supporter, but it’s unacceptable that he’s also willing to suspend the Fourth and Fifth Amendments when he deems it necessary.”
When Amir Mohamed Meshal, a natural-born citizen of the United States, fled from Somalia’s civil war into Kenya in 2007, he was captured by the U.S. Combined Joint Task Force. The American Civil Liberties Union complaint filed on his behalf claimed that Meshal was “interrogated more than thirty times by U.S. officials who failed to adhere to the most elementary requirements of the Fourth and Fifth Amendments and the Torture Victim Protection Act of 1991,” and that “U.S. officials repeatedly threatened Mr. Meshal with torture, forced disappearance, and other serious harm.”..