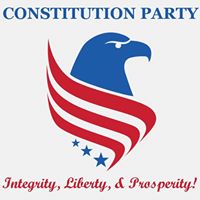 "We’ve been informed that Mr. J.R. Myers (former Chair of the Alaska Constitution Party, currently a resident of Montana and a member of the National Executive Committee) has been appointed Western States Co-Chair by the national CP.

Mr. Myers is no stranger to Idaho’s Constitution Party.
He ran in our very first CP-Idaho Presidential Primary in 2016, placing second. He was then named by CP-Idaho onto the printed state ballot in November as our party’s candidate for Vice President along with his running mate Rev. Scott Copeland of Texas at the top of the ticket.
Mr. Myers went on to compete in presidential primaries of other western states in which the national CP candidates were not represented in 2016. So, Mr. Myers has been somewhat maverick, shall we say…a good thing."