An Interview With James N. Clymer At The Constitution Party National Committee Meeting In Denver 4/21/18 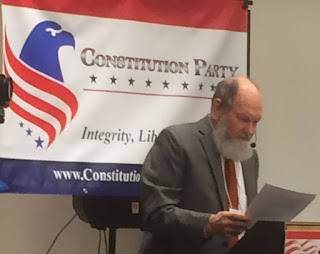 "1992: A coalition of independent state parties united to form the U.S. Taxpayers Party at its first national convention in New Orleans, Louisiana.  Among the notable convention speakers was former Congressman Ron Paul. The party’s founder, Howard Phillips of Virginia, Chairman of the grass-roots lobby, the Conservative Caucus, was nominated to be the party’s first candidate for President with retired Army Brigadier General Albion Knight of Maryland nominated as the party’s first vice-presidential running mate.  The party’s founder, Howard Phillips, was on the ballot in 21 states as its first presidential candidate.

1995: Party recognized by Federal Election Commission as a national party bringing the number of nationally recognized parties to 5.
1999: Name changed to “Constitution Party” by delegates at the National Convention to better reflect the party’s primary focus of returning government to the U.S. Constitution’s provisions and limitations."

According to his bio in the CP National website:  CP ExCom

"Jim served as National Chairman for three terms from 1999 to 2012. He is the senior partner in the Lancaster, Pennsylvania law firm of Clymer, Musser and Conrad. As the party’s nominee for Lt. Governor in both 1994 and 1998, his candidacy set Pennsylvania vote records for 3rd Party candidates. During his 2004 run for US Senate against Republican Arlen Specter, he received more than 200,000 votes. Jim Clymer was the vice-presidential running mate for 2012 Constitution Party presidential candidate Virgil Goode. Jim and his wife, Lois, have five adult children."

Jim surprised many in Denver, as he was sporting a long grey beard.  It seemed fitting for a founding member of the party.  One of the, "Ancients," as Jim was often affectionately  referred to during the Denver meetings.  He even started to refer to himself by that term.  "Those of us who were there in the beginning, are a diminishing number for sure.  I am one of the Ancients."

"I learned to know Howard Phillips, that led up to 1991.  He had a vision to start a new party.  He asked me to get involved. We met the Fall of 1991.  We developed the bylaws and Constitution.  I was appointed Eastern States Regional Chairman.  Ted Adams was the first National Chairman.  He served one term.  Bill Shearer next served one term.  He had health issues."  BAN: William Shearer Dies

"I was asked to chair a couple of meetings when Shearer was unavailable.  After that, I ran for Chairman, and was elected in 9/1999.  I served three elected terms, until my last term ended in 2012, and Frank Fluckiger became CP National Chairman."

Now, Jim says, "I wish I could have done more.  The party has to come of age.  There used to be a lot of enthusiasm.  Typically, twice the attendance at National Committee meetings.  We've had a lot of people who've come and gone.  We went through a period of malaise.  We had some who went back to the GOP and became elected.  It was tempting for many."

Jim continued, "Then we had a significant split in 2005/6, shortly after the 2004 election.  It happened in Tampa, Florida.  The party never completely healed from that, it was a stressful time.  There was no good solution to it (the abortion issue).  It could have gone either way, and it would have destroyed the party.  The party attracts passionate people.  We need to learn to be more resilient and flexible.  There are differences in religious faith traditions.  Some have left over those."

In response to the question about his vision of the future of the Constitution Party, Jim believes, "We have to develop a better youth program.  We made a couple attempts in the past to establish college programs.  We found out at CPAC (this year) that young people are more receptive to our message than older folk."

Jim continued, "I think we need to continue to look for opportunities.  I don't believe we should challenge every race.  We need to run good candidates, who contrast significantly with the main party candidates.  I think the state and local levels is where we need to look at running candidates.  I think we should focus our energies on those races where we can present a clearer contrast to the other parties, where we can make the biggest difference."

Regarding ballot access, Jim said, "Another thing is, we've got to get better at getting ballot access.  For the past three Presidential elections, we've been on fewer ballots each time."

When asked about the critical California ballot line, which was lost when the California American Independent Party disaffiliated from the Constitution Party in 2008, Jim said, "Since we lost the AIP in California, we lost a vehicle which we have not been able to get back.  I believe we should make an effort in every state.  I don't have a strategy for California now.  We made that attempt to use the Independent Party line, but the California Secretary of State and the courts went against us.  So, that ballot line was closed.  I'm not averse to working with the CA AIP again, if that opportunity would open up.  We have to do something to develop a strategy." 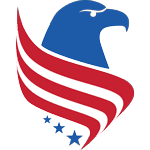 It's hard to be an alternative party when so many are indoctrinated. All we can do is be devoted & make sacrifices.

"When asked about the critical California ballot line, which was lost when the California American Independent Party disaffiliated from the Constitution Party in 2008, Jim said, "Since we lost the AIP in California, we lost a vehicle which we have not been able to get back. I believe we should make an effort in every state. I don't have a strategy for California now. We made that attempt to use the Independent Party line, but the California Secretary of State and the courts went against us. So, that ballot line was closed."