Libertarian Party gets a boost in NM 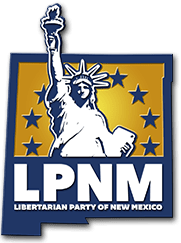 
Something major happened with the Libertarian Party of New Mexico yesterday—it officially became a major party.
After Gov. Susana Martinez issued her biennial primary election proclamation late Monday, the New Mexico Secretary of State announced that New Mexico’s liberty and limited government-minded group will have equal standing with the Democratic and Republican parties for the first time in New Mexico history. Monday, the Libertarian Party of New Mexico, on a rooftop deck in Old Town Albuquerque, officially announced its slate of candidates for everything from Congress to State Land Commissioner.
In most of those races, candidates will be facing off against uncontested Republicans and lots of Democrats.
With election day about eight months off, the Libertarian Party of New Mexico has three statewide and three congressional hopefuls collecting signatures to qualify as official candidates. Its most notable candidate is New Mexico Land Commissioner Aubrey Dunn, who recently changed his official registration from Republican to Libertarian and announced a run for U.S. Senate.
“I think it’s an exciting time and it gives voters, who are possibly dissatisfied with the gridlock that happens and the party politics that go on between the Democrats and Republicans, an opportunity to vote for a third party,” Dunn said.
Besides Dunn, the potential Libertarian ticket has a list of political converts, including former Democratic State Representative Sandra Jeff and Aubrey Dunn’s son Blair, who once ran for State senate as a Republican with “very strong” libertarian leanings...
To read more, click here.
at February 03, 2018